Detox Antiox™ synergistically combines an extensive array of nutrients that combat free radicals and help support the detoxification of chemicals and heavy metals.

NOT FOR SALE TO USA. We are only able to ship this item to Canadian customers.

Detox AntioxTM synergistically combines nutrients, herbal extracts and other compounds that have positive effects on the body’s detoxification processes. The ingredients in this product were selected for their ability to combat free radicals and help detoxify harmful substances including heavy metals. This formula contains multiple nutrients known to raise glutathi- one levels, making it helpful for supporting phase II liver detoxification. Detox AntioxTM is also designed to aid in the production of metallothionein, a cysteine-rich protein with potent antioxidant effects and heavy metal binding capacity, including to cadmium and copper.1,2 Metallothionein has even greater free radical quenching capacity than glutathione for certain specific free radicals, such as the hydroxyl radical.1

Taken as a whole, the ingredients in Detox AntioxTM have specific roles in the mitigation of heavy metal toxicity and can improve the mobilization and excretion of harmful compounds when used in conjunction with standard chelating agents.3

• Lipoic Acid: a sulfur-containing compound that exhibits amphipathic antioxidant properties (it is effective in both water- and lipid-based environments). This unique property allows it to quench free radicals in hydrophilic and lipophilic environments alike—cytosol, plasma membranes, serum, and lipoproteins.4,5 Lipoic acid (LA) is an “antioxidant of antiox- idants.” When reduced to dihydrolipoic acid (DHLA), it serves to regenerate vitamins E and C, glutathione (GSH), and coenzyme Q10.5,6 Coupled together, oxidized and reduced LA have a greater redox potential than oxidized and reduced GSH, leading some researchers to refer to lipoic acid as a “universal antioxidant.”5 An additional effect of LA’s antioxi- dant capacity is its role in binding free, redox-active metals. LA has been shown to bind copper, manganese, zinc, and lead, while DHLA is effective in binding copper, zinc, lead, mercury, cadmium, and iron.5-7 Lipoic acid may increase the need for biotin by lowering levels of biotin dependent enzymes; thus, this formula includes biotin as LA should always be taken with biotin.8,9

• Selenium, Zinc: Selenium is needed for the synthesis of at least five isoforms of glutathione peroxidase (GPx), which reduces damaging hydrogen peroxide to water.10,11 Selenium is also needed for the thioredoxin reductase enzyme family, considered to be among the major antioxidant enzymes and redox regulators in mammalian cells.10 Selenium has a key role in protecting against mercury toxicity.12-15 Some of the toxicity symptoms associated with high mercury levels may be due to reduced availability of selenium and the resulting reduction in activity of selenium-dependent enzymes such as GPx and the deiodinase enzyme needed for conversion of T4 to T3 for proper thyroid hormone levels. An adequate supply of selenium may help mitigate the effects of mercury toxicity or possibly even reverse some of the symptoms.12,13 Together with selenium, zinc (bound to methionine) aids in synthesis of metallothionein.

• Manganese: a required cofactor for mitochondrial superoxide dismutase (MnSOD), a key antioxidant enzyme for protecting fragile fatty acids in mitochondrial membranes against lipid peroxidation.17,18 Manganese is also a cofactor for the arginase enzyme in the urea cycle, so it plays a role in proper dispensation of normal metabolic wastes.19 The body’s concentration of manganese is especially high in mitochondria and is also high in organs that have a large role in detoxi- fication, including the liver and kidneys.20

• Molybdenum: an essential cofactor in multiple enzymes involved in detoxification, such as sulfite oxidase, xanthine oxidase and aldehyde oxidase. Among other roles, these are responsible for normal breakdown of purines and sulfur-containing amino acids, oxidizing harmful sulfites to sulfates, and metabolism of pharmaceutical drugs and xeno- biotics.21,22 Deficiency in sulfite oxidase may result from inadequate molybdenum, potentially leading to sulfite/chemical sensitivity and alterations in CYP450 activities that affect metabolism of various drugs.23-2 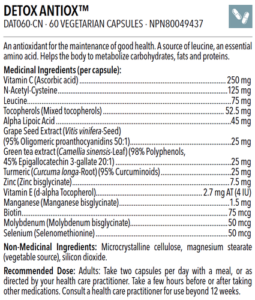 Be the first to review “DETOX ANTIOX” Cancel reply 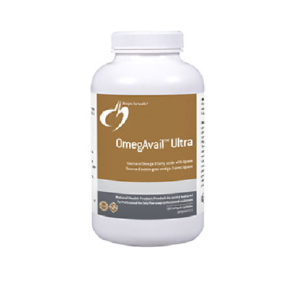 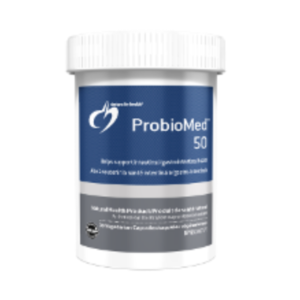